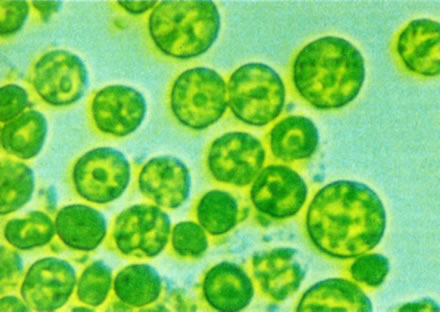 Chlorella is a microscopic freshwater algae(between 2 and 12 microns), single-celled and eucaryotic (with a clearly defined nucleus), which appeared on Earth 2.5 billion years ago. One of the first life forms to appear on Earth, it managed to survive the passage of time. This was thanks to its highly resistant membrane, something which can be seen from Chlorella fossils. It was not, however, until the end of the 19th century and the invention of the microscope that the Dutch biologist Beijerinck discovered this algae in 1890.

There are around ten types of Chlorella among the 25 000 species of algae known to exist on this planet. However, the type pyrenoïdosa has by far the greatest number of benefits for human health and well-being. Chlorella is rich in chlorophyll, containing between 3 and 4%, rich in protein (60%), trace elements and vitamins, not to mention the unique Chlorella growth factor present in the cell nucleus. Chlorella is thus most definitely an exceptional dietary supplement.

Chlorella multiplies by cell division and this extremely quickly: one mother cell produces four daughter cells every 24 hours. Such rapid division is a result of the Chlorella growth factor.

The Chlorella which we are offering on the Swiss market comes from the Taiwan Chlorella Manufacturing Co. cultivation centres in Taiwan and in Hainan, China. The company, established in 1964, specialises in producing the algae and holds the quality certificate ISO 9001: 2000.

Chlorophyll is a natural green pigment present in plant cells. It plays a vital role in photosynthesis (plants' production of carbohydrates using carbon dioxide from the air which they are able to trap thanks to sunlight). Chlorella contains the highest level of chlorophyll in the entire vegetable kingdom, around 3%, as opposed to 1.5 % for green plants such as spinach or alfalfa.